CMT Association's Market Insights features timely technical analysis of current global markets by veteran CMT charterholders. Each post appears on www.tradingview.com/u/CMT_Association/ in an effort to explain process, tools, and the responsible practice of technical analysis. Shared content and posted charts are intended to be used for informational and educational purposes only. The CMT Association does not offer, and this information shall not be understood or construed as, financial advice or investment recommendations. The information provided is not a substitute for advice from an investment professional. The CMT Association does not accept liability for any financial loss or damage our audience may incur.

Even in retirement I scour hundreds of weekly and monthly charts. When I come across promising setups, I drill down to see if there are chart elements, price volume relationships, or other factors that might either preclude a trade or tip the odds heavily in favor of a particular outcome. Most of that process is covered in the “Potential TLT inflection and Notes on Process” post linked below.

FXI, is the China Large Cap ETF that holds the top 50 large cap stocks trading on the Hong Kong exchange. It is currently testing long term support. The outcome of the test is likely to set the stage directionally for the remainder of the year. While I came away from my analysis with a bearish view, this is also precisely the kind of setup around which I build mostly agnostic trading plans.

Fundamentally, there isn’t much currently going on in China that leads me to optimism. China is a command economy run by a communist regime that is in the process of retreating from capitalism. Importantly, they seem to be increasingly resistant to stimulus. In the near term, the Zero Covid policy is still in effect and the property and construction sectors are in crisis. To that list you can add a rapidly aging population, a world increasingly resistant to buying from their goods, a rethinking of global supply lines and significant raw material and climate challenges. Granted, there are positives. They are becoming a chip superpower, and over the last two years have made some very significant technological advances. But, my in my view, the negatives outweigh the positives by quite a lot.

In early March, as price was punching through the range support, Vice Premier Liu He promised to keep equity markets stable, and that the crackdown on the tech sector would end soon. The promise created one of the strongest two-day rallies in years. Clearly, if China chooses to massively stimulate and overtly support their equity market (perhaps through direct purchase of equity) it would be a game changer. But, despite Liu He, I think pessimism is warranted. That said, as students of the market, we understand that narratives drive markets, until they don’t, and then new narratives, evolve to explain the new price action.

Those of you familiar with my work know that I maintain a macro view on most markets. That view, informs my aggressiveness and risk tolerance, but, if a techncial setup provides a clear risk reward advantage, it does not deter me from making trades that don’t conform to the view. FXI is setting up exactly that situation.

Either it survives the test of the range lows, and sets up for potentially a 20-25% move higher, or fails and sets up what could be an even larger move lower. Either way, I will have a trading and risk management plan in place, no matter the directional outcome. 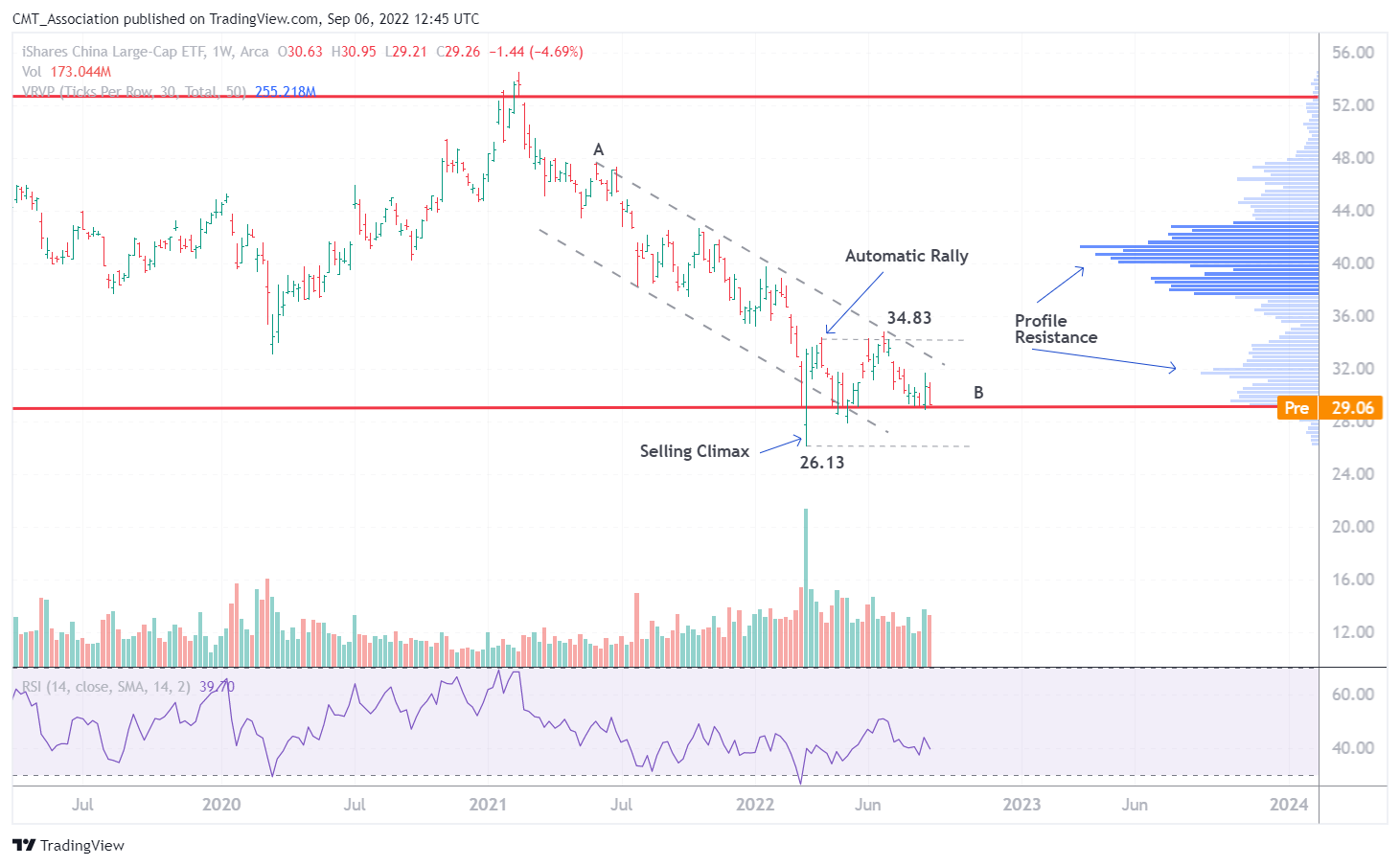 FXI Weekly: Since the March climax and automatic rally (AR) the market has traded laterally for 24 weeks and defined a trading range. Whether the range is one of re-distribution or of accumulation is an important, but difficult, question.

In this perspective the selling climax structure holds up, with a clear/classic high volume reversal bar. But, the follow through (AR) over the next two weeks was meager and volume still quite high. The combination of high volume and narrow price spread suggest that the market was already running into significant supply.

The Wyckoff selling climax sequence includes what he called the “automatic rally” (AR). The AR occurs as immediate sellers are cleared out by the selling climax. Some strong handed, proactive traders take new longs creating some nascent demand. I prefer to see the AR cover a significant distance. In my estimation, a weak AR represents a sign of weakness.

To become constructive, the market must, at a minimum, break above the A-B downtrend. That downtrend represents the stride of supply. It must also move convincingly above the lateral resistance along the 34.83 zone.

It is notable that FXI, has yet to complete a solid test of the low. I prefer tests well separated in terms of time that come close to fully retracing the climax structure. Failing this, a sign of strength above the high of the automatic rally (34.83) would suffice to suggest that a good bottom was in. If that level is exceeded, entering bull flags and other corrective style drift patterns would become part of my approach.

I have included a long-term volume profile on the chart. If the market does begin to work its way above the lateral resistance, the huge volume bulge in the 42.00 zone should act as strong resistance. 42.00 is also in the vicinity of the .50 – . 618 retracement zones. 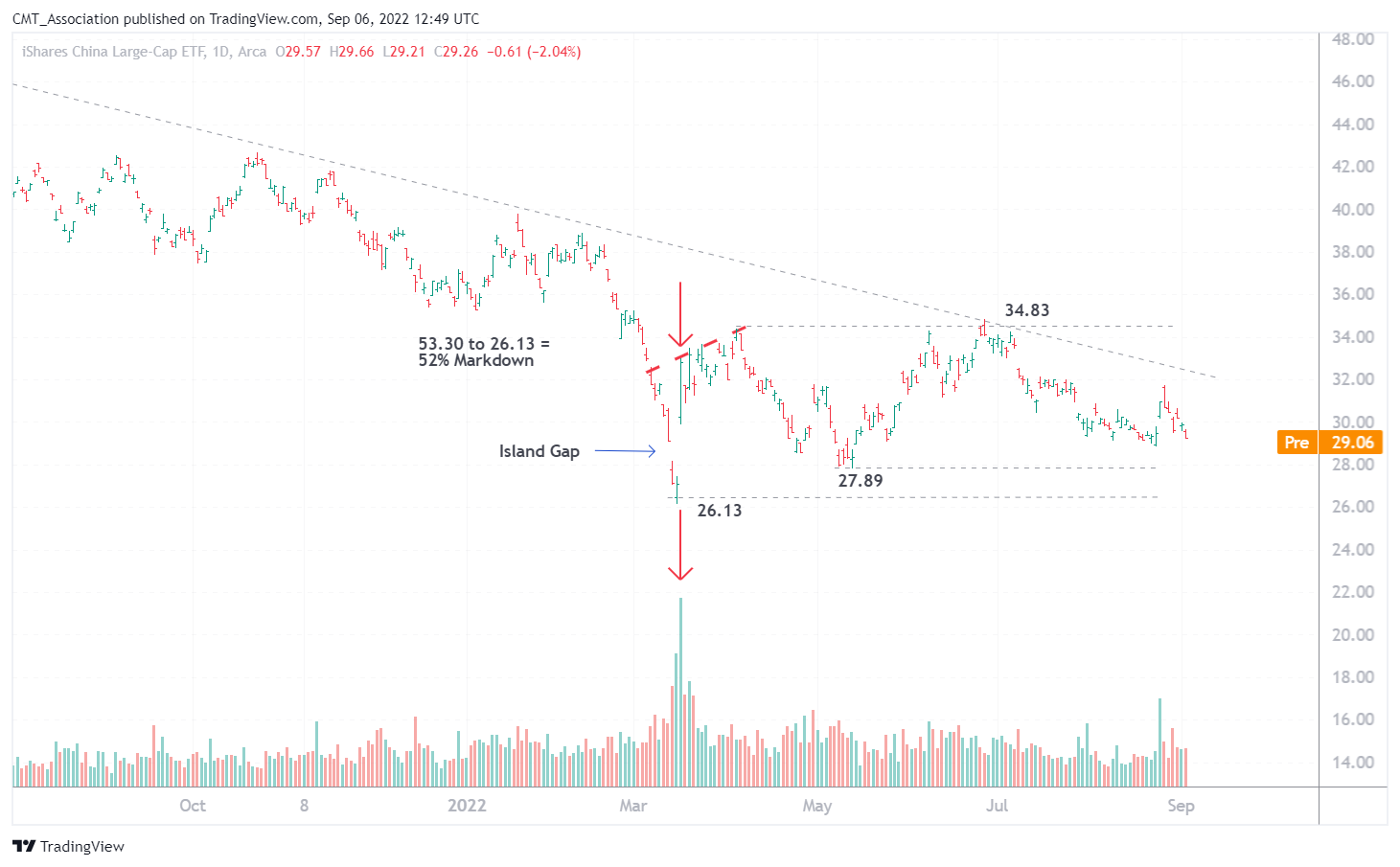 FXI Daily: In this perspective the selling climax appears very different. After gapping through the support, volume increased significantly and price spread narrowed somewhat (suggesting at least some developing demand). The Liu He statements gapped the market 10% higher and left behind an island reversal gap.

In this perspective it becomes clear that the exhaustive volume wasn’t generated in a typical selling climax fashion, but rather after the gap and near the highs. In my view much of the volume was generated by strong handed sellers selling into the strength AFTER the market gapped higher. This is clearly an atypical selling climax and tempers any enthusiasm generated by the violent rebound evident on the weekly and monthly chart.

It is also notable that the lateral trade since the March low have relieved the oversold conditions that had accrued at the March low. 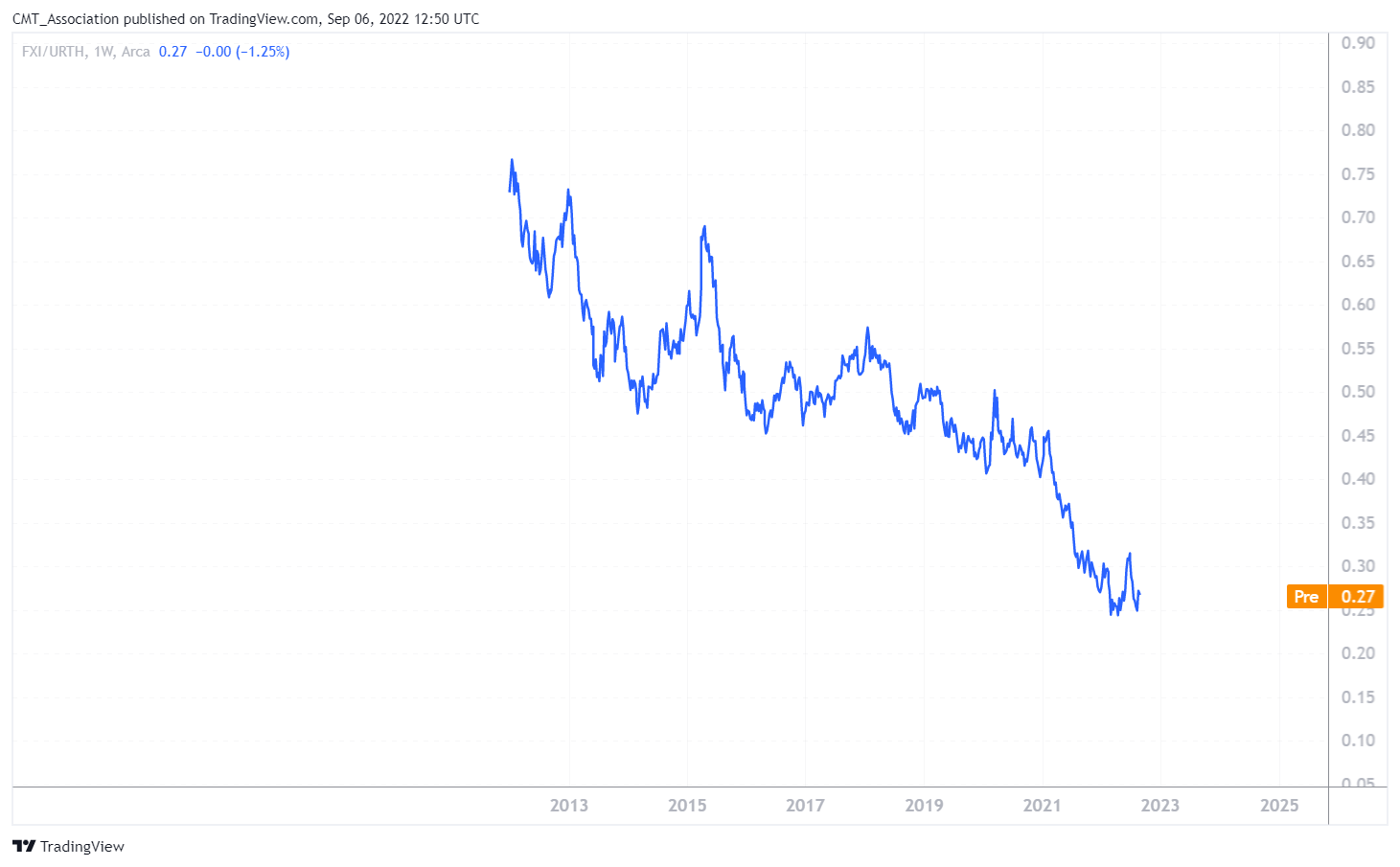 Relative Strength Ratio Chart: This is a weekly relative strength chart, comparing FIX (the numerator) to world markets URTH, (the denominator). It is somewhat skewed because URTH is not ex-China. In other words, China is included in both numerator and denominator, skewing the ratio. However, over the last decade, China has consistently underperformed. To become optimistic for anything beyond a trading turn would require the Chinese market begin to markedly strengthen relative to the rest of the world. 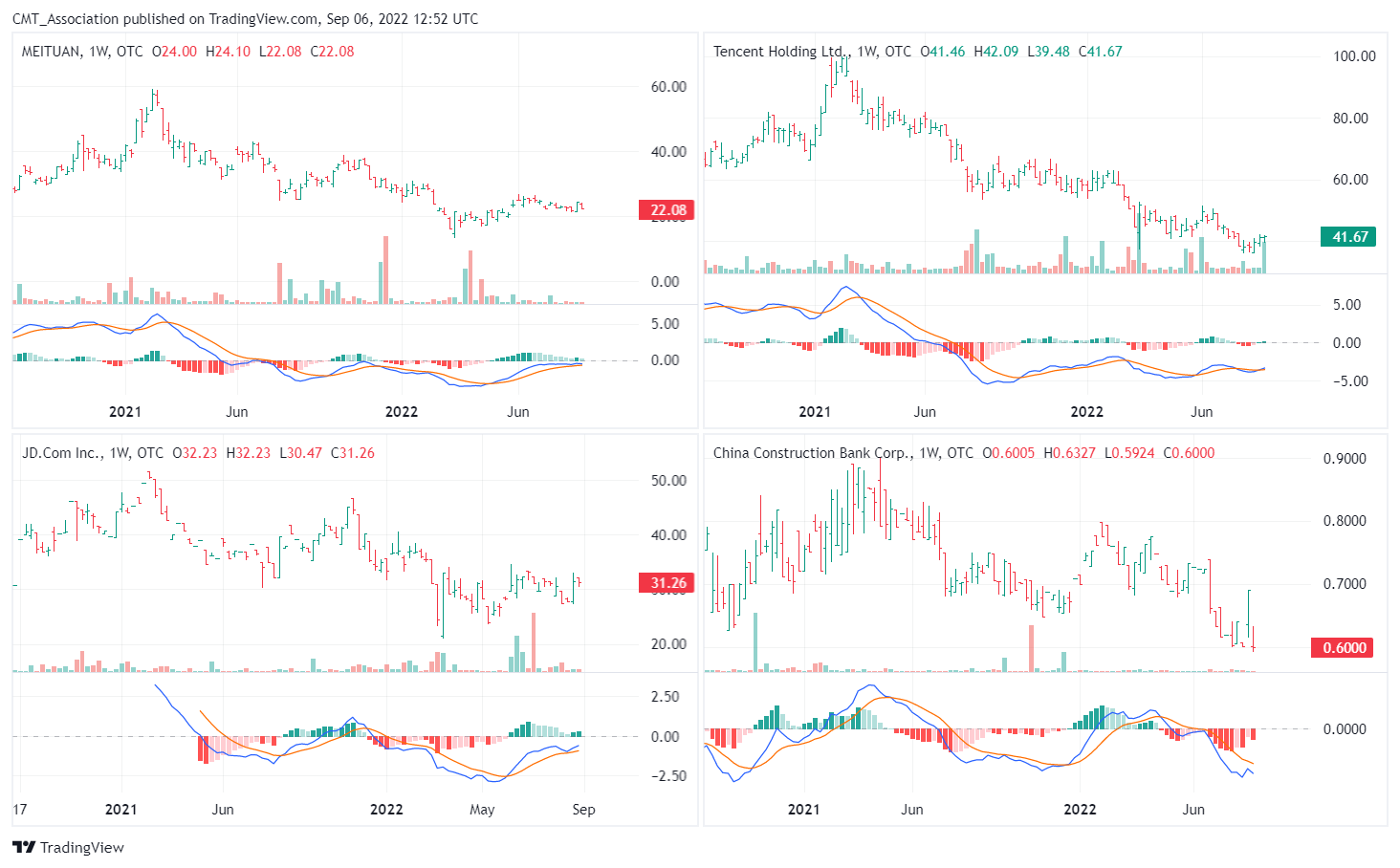 I often take a quick look at the larger components of any ETF I am thinking about trading. As I look through the top eight large cap names in the ETF I see few signs of a solid bottom or charts that appear ready to rally.

One last thought, in the process piece linked below my final step is the sanity check. Am I falling prey to behavioral bias? Am I being dispassionate? Is my belief system compromising my impartiality? I have to conclude that in the case of China, that it may well be so. I don’t like the Chinese government and am loath to invest there for anything other beyond a trading turn. Historically, command economies that are becoming less free tend to make for lousy investments. They are also subject to step function changes due to changes in policy, wrecking risk management overlays. Clearly my strongly held view may compromise my read of the FXI chart. Because of this I will need pay greater than normal attention to how I build my trading plan.

Conclusion: I believe that the weight of the evidence suggests the presence of superior supply and supports the likelyhood that, once the oversold is removed, FXI falls through the bottom of its longer-term range. Clearly if the Chinese add stimulus or perhaps buy equity directly, the game/narrative could quickly turn and I will need to adjust. But as I build my trading plan I will be more much aggressive on the short side of the market.

And finally, many of the topics and techniques discussed in this post are part of the CMT Association’s Chartered Market Technician’s curriculum.

Shared content and posted charts are intended to be used for informational and educational purposes only. The CMT Association does not offer, and this information shall not be understood or construed as, financial advice or investment recommendations. The information provided is not a substitute for advice from an investment professional. The CMT Association does not accept liability for any financial loss or damage our audience may incur.