Miner points out that there is a very high probability of trend change when both price and time ratios coincide.

Miner’s Trend VibrationTM method is based on two directional movements early in a trend: the initial thrust and the initial corrective wave of that thrust. Together, these two movements are Elliott Waves one and two, and Miner calls the initial vibration. Fibonacci ratios of that initial vibration time projected forward coincide with subsequent turning dates, including the end point of the completed trend.

Of secondary importance are the day counts, using both trading days and calendar days. When one or more day counts is a number in the Fibonacci sequence, the probability of a directional trend change is heightened. The more hits on Fibonacci numbers, the greater the confirmation and power of that date.

At the independently determined cyclical time of probable trend change, Miner has observed that price is often near one extreme band or the other. Then, to confirm the trend change, price moves quickly to the opposite band, in the direction of the new trend, showing a relatively high degree of absolute price velocity. Trend, Elliott Wave and Chart Pattern interpretation complement and complete Miner’s cycle analysis.

The first number of the sequence is 0, the second number is 1, and each subsequent number is equal to the sum of the previous two numbers of the sequence itself, yielding the sequence 0, 1, 1, 2, 3, 5, 8, etc. In mathematical terms, it is defined by the following recurrence relation:

That is, after two starting values, each number is the sum of the two preceding numbers. The first Fibonacci numbers also denoted as Fn, for n = 0, 1, 2, … ,20 are:

The closed-form expression (known as Binet’s formula, even though it was already known by Abraham de Moivre) for the Fibonacci sequence involves the golden ratio:

The golden ratio is the limit of the ratios of successive terms of the Fibonacci sequence (or any Fibonacci-like sequence):

Therefore, if a Fibonacci number is divided by its immediate predecessor in the sequence, the quotient approximates φ; e.g., 987/610 ≈ 1.6180327868852. These approximations are alternately lower and higher than φ, and converge on φ as the Fibonacci numbers increase, and:

Furthermore, the successive powers of φ obey the Fibonacci recurrence:

This identity allows any polynomial in φ to be reduced to a linear expression. For example:

The following slides were provided by Ralph Acampora, CMT and the New York Institute of Finance. 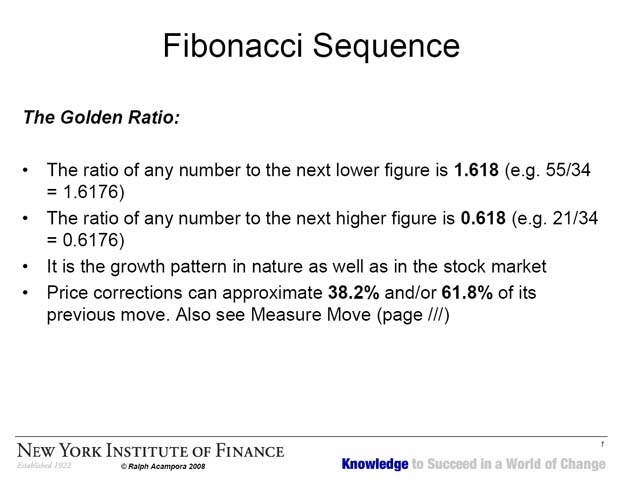