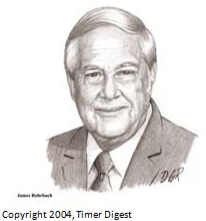 Jim Rohrbach is the President and founder of Investment Models®, Inc. He was ranked 4th in the country by Timer Digest on their Top Ten Timers List for the past 4 months ending 8-21-15. He s a Registered Investment Advisor and has written a weekly stock market time newsletter for the past 37 years. His career as a market timer began after a 25-year career with AT&T where he held various operations and staff management positions. After that, he turned his attention to the stock market and has developed two Market Timing RIX® Indexes. With these indexes, each day he converts the stock market action into a number that represents the trend of the market. This allows for market timing signals that
are precise with no what ifs, maybes, or hedged statements.  Jim was repeatedly been ranked as the number 1 market timer by Timer Digest, most recently for the first six months of 2014. His newsletter has also been highly ranked by the Hulbert Financial Digest. Other honors include receiving the second highest number of votes for Guru of the Year on TheStreet.com in 2001. Jim has been the subject of a number of feature stories and his work has been widely quoted in the media.