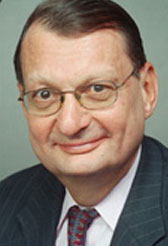 Philip J. Roth, who holds the Chartered Market Technician designation, was the Chief Technical Market Analyst at Miller Tabak + Co. from 2001 until April 2012. Phil was a Wall Street professional for 46 years, and has been in the industry for over half a century, having served as the chief market technician at Morgan Stanley, Dean Witter, Shearson Lehman, EF Hutton, and Loeb Rhodes. He is a three-time past President of the CMT Association and a former director, as well as a former director of the New York Society of Security Analysts.

Phil is currently Vice President of the Technical Analysis Educational Foundation. He is an Adjunct Professor in the Graduate School of Business at Fordham University and at IE Business School in Madrid, Spain, and has lectured at Baruch, Pace, Columbia, Cornell, Georgia Tech, Howard, Ohio State, Pittsburgh, Rutgers, Seton Hall, Tulane, the University of Wisconsin, the University of Virginia, and the University of Richmond.  Roth served as Interim Executive Director of the CMT Association from September 2015 to January 2016.