CMT Association's Market Insights features timely technical analysis of current global markets by veteran CMT charterholders. Each post appears on www.tradingview.com/u/CMT_Association/ in an effort to explain process, tools, and the responsible practice of technical analysis. Shared content and posted charts are intended to be used for informational and educational purposes only. The CMT Association does not offer, and this information shall not be understood or construed as, financial advice or investment recommendations. The information provided is not a substitute for advice from an investment professional. The CMT Association does not accept liability for any financial loss or damage our audience may incur.

In January I reviewed the long-term technical and fundamental positions of the big four: Bonds, Equities, Commodities, and the Dollar. Those pieces are extensive in terms of both fundamental and technical outlooks and are linked below.

January 2022 Observations: Bottom Line: It’s a range trade until it ain’t no more. Impetus for a range break could be provided by the Federal Reserve increasing rates significantly faster/slower than current expectations or faster/slower than other central banks. Externally, a flight to safety resulting from disruption in emerging markets, armed conflict in Europe, or significant new domestic fiscal stimulus are all possibilities. When thinking about the Dollar it’s worth remembering that currency is a relative game. It’s not only the domestic economy and monetary/fiscal policy, but those factors relative to the same factors inside our largest trading partners.

Where is the market now? Since January, flight to quality, an ultra-aggressive Fed tightening cycle, conflict in the Ukraine and EM turmoil have all combined to produce a roughly 14% rally. In May, price thrust above the resistance along the top of the 102-104 zone. Over the last few weeks, the market narrative changed and profit taking ensued, resulting in the market moving back toward the breakout zone. The decline built a bull flag (easily seen on the daily perspective chart). Now the recent thrust higher suggests that the correction may be complete. 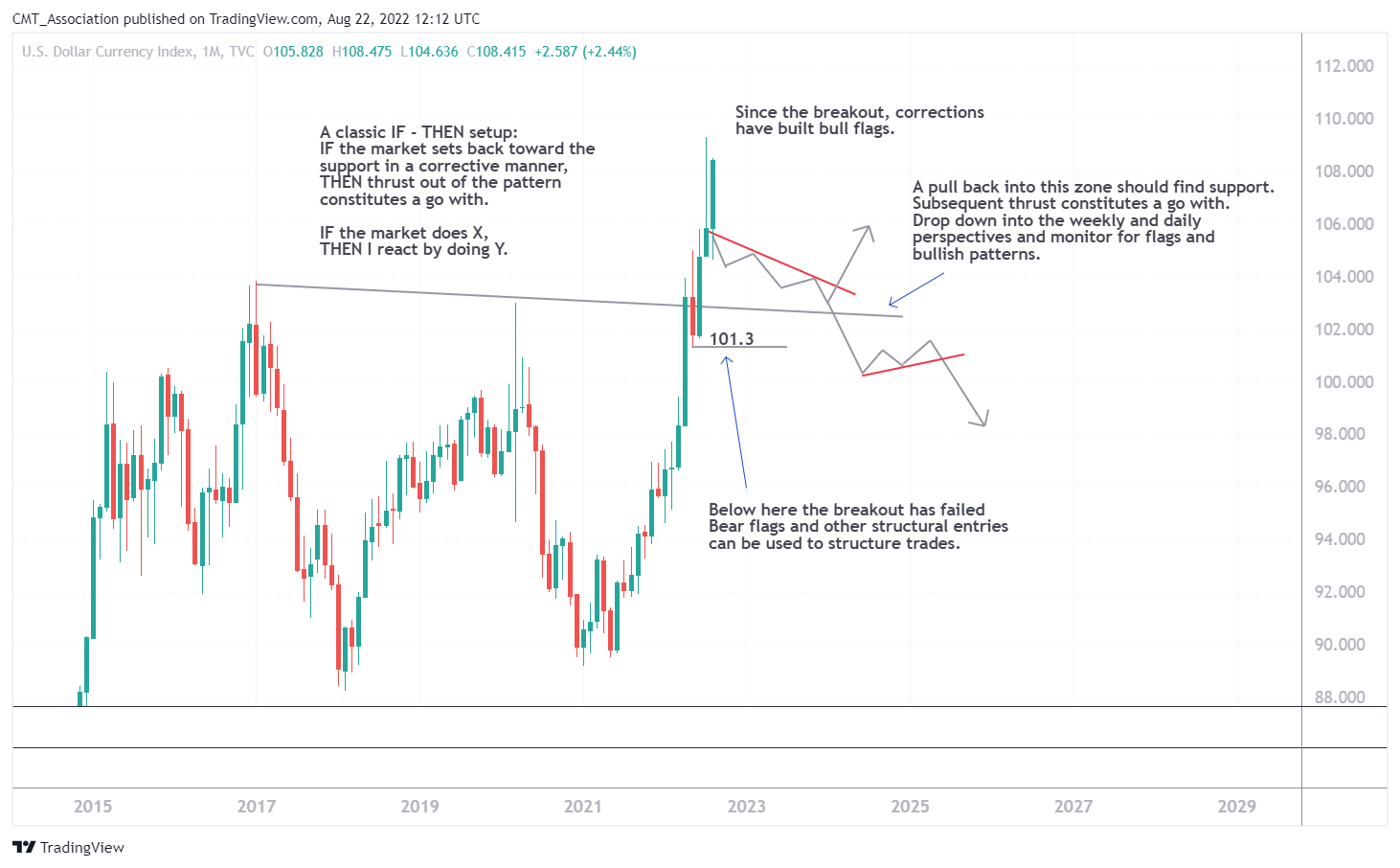 A Note on Tactics: I have a preference toward systemizing discretionary behaviors. My approach to trading breakouts generally falls into this category.

After a breakout (In any perspective) there are generally three main behaviors that I monitor for (and many variations on the themes) and three general trading reactions to those specific behaviors. I like to build trading plans around those three behaviors.

Behavior 1: The market thrusts, closes above resistance and rallies without setting back to test the breakout zone (This appears to be what is unfolding now). This behavior is the most bullish of the three. Plan: Buy bullish thrusts from bull flags and corrective patterns in the lower perspective time frames.

Behavior 2: The market sets back to the top of the broken range, preferably in a corrective manner and then rallies. Plan: Buy thrust out of the lower time perspective pattern that develops on a decline to test the breakout.

Behavior 3: The market fails and falls back into the range. Plan: Sell breaks of the bear flags that develop as the market breaks lower. Failed breakouts often produce significant reversals.

Sometimes the behaviors are muddled and no clear pattern develops. If that occurs, no worries… find another market to trade. 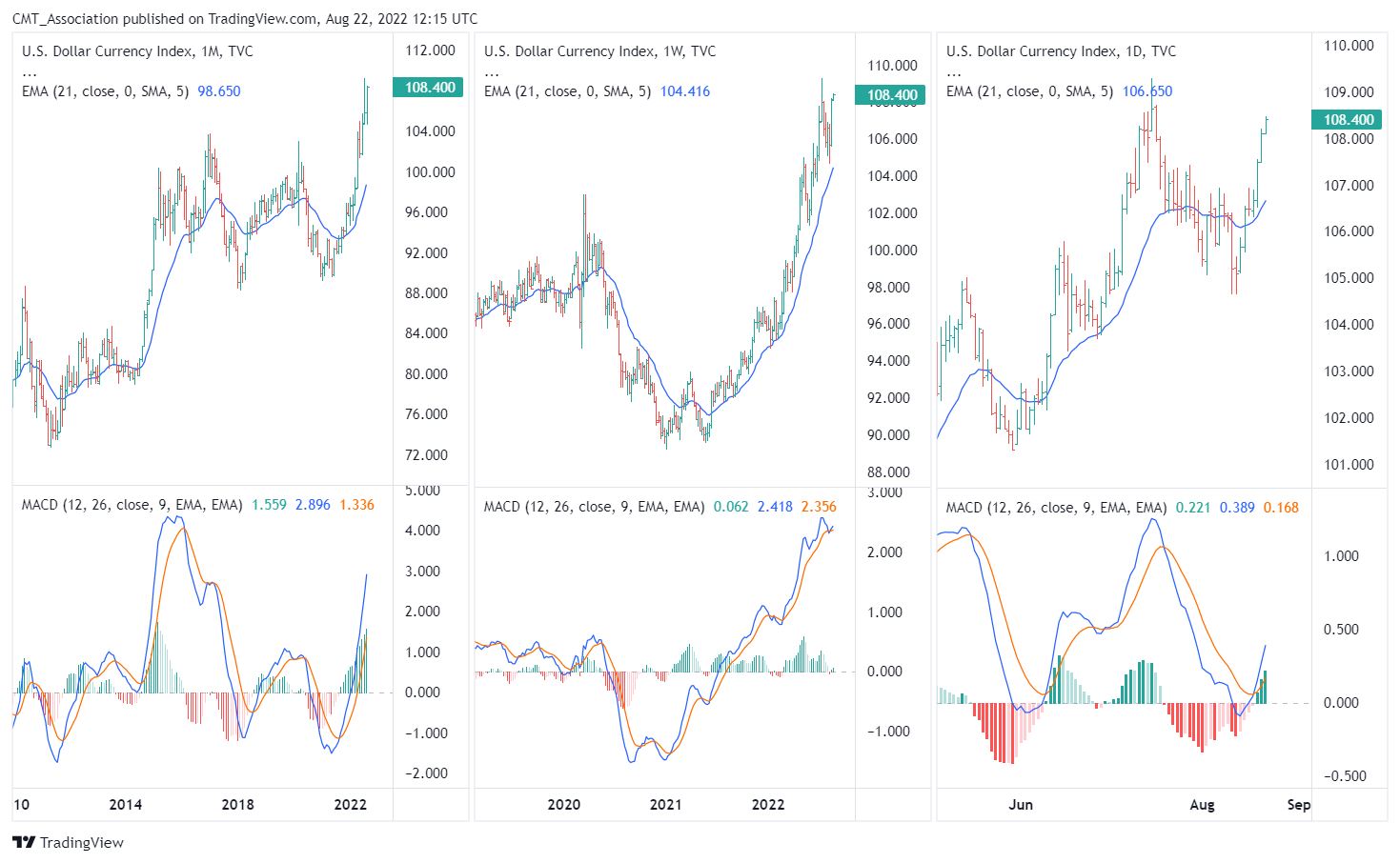 Triple Screen: A bit of a mess in that the weekly momentum is so overbought, but often when a market breaks out from a long-term range overbought momentum is actually a sign of strength. Importantly, the trend in price is ALWAYS more important than the state of momentum.

Weekly: Price trend is clearly higher and momentum is overbought and is attempting to turn lower. With monthly momentum higher, pullbacks in this perspective can be used to enter monthly perspective/macro positions.

Daily: The short term overbought has been relieved. The pullback from the high has been entirely consistent with corrective behavior. 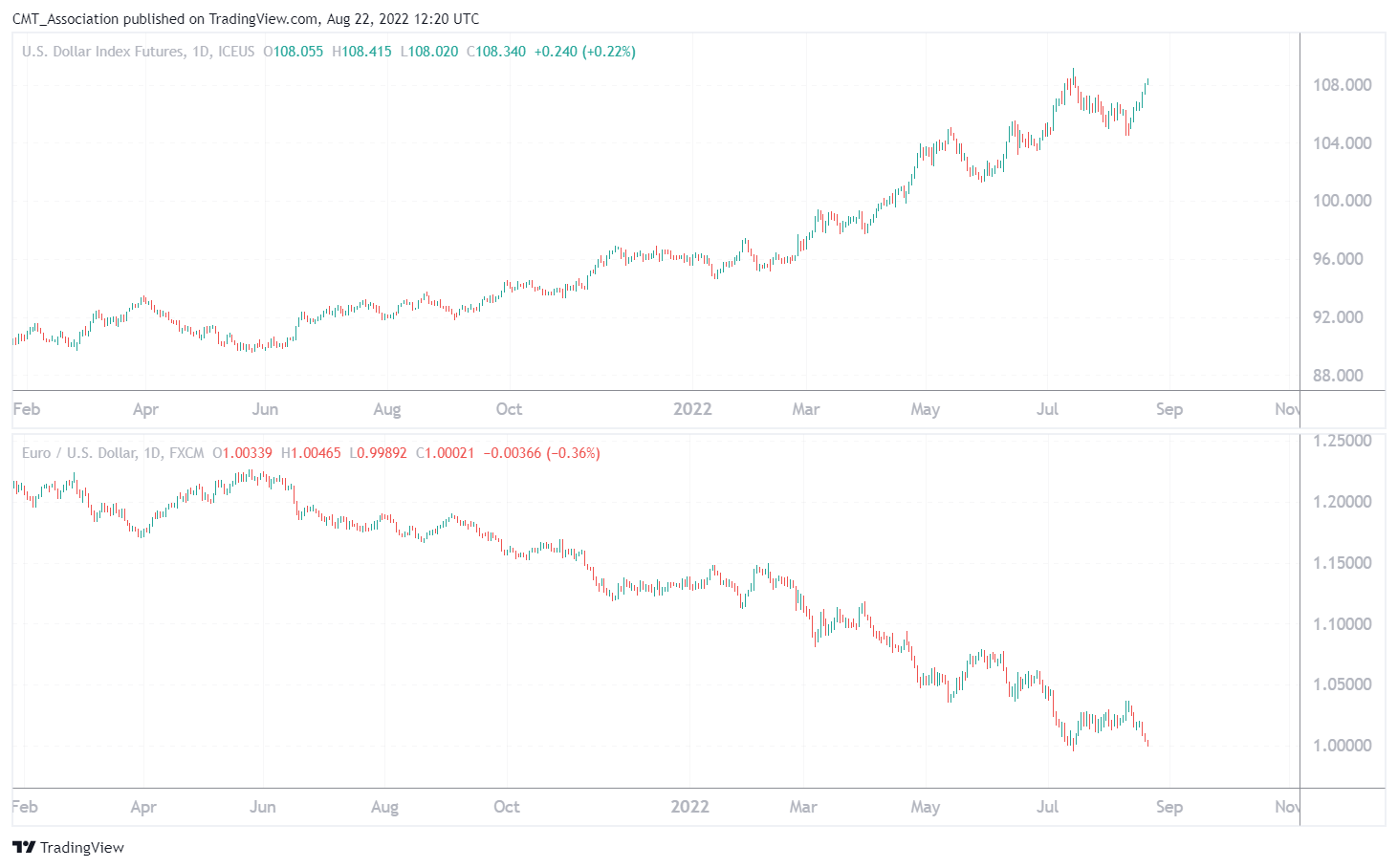 Fundamentally:
If you believe that DXY will turn lower, you must simultaneously believe that the Euro is ready to turn higher as it has an almost 60% weight in the index. I suspect, given Europe’s challenges, that a wave of fiscal stimulus to offset the winter energy shock will serve to further weaken the currency. Less farfetched is the idea that JY (14% weight) might strengthen somewhat. But its much smaller weight will produce far less DXY gravity than the Euro.

The same change of narrative that produced the rally in risk assets has pressured DXY. Markets seem to believe that the easing of inflation (a slower rate of change ) means that the Fed is nearing the end of its tightening campaign and, perhaps will begin cutting rates in reaction to a slowing economy. But the easing of financial conditions created by the rallies in risk assets and still strong employment gives the Fed plenty of room to continue increasing rates. I think they have been abundantly clear that they are determined to bring inflation under control, even in the face of a much weaker economy. In my mind, Powell needs to decide if his legacy is Arthur Burns or Paul Volker. My guess is he chooses Volker. Volker = stronger DXY.

Fiscal impulse in the US should remain negative. The prospect of a split congress significantly decreases the likelihood of substantive new spending bills.

In relative terms the US Fed remains one of the most aggressive tighteners on the planet. The combination of rate increases and quantitative tightening creates a powerful bullish relative mix for DXY.

Finally, in my opinion, successful trading requires strong opinions that are loosely held. I wake up each day questioning my positioning and thesis, because… things change.

Shared content and posted charts are intended to be used for informational and educational purposes only. The CMT Association does not offer, and this information shall not be understood or construed as, financial advice or investment recommendations. The information provided is not a substitute for advice from an investment professional. The CMT Association does not accept liability for any financial loss or damage our audience may incur.